Matt Woods has his own favorite "Hinds story" to tell.
By: Danny Barrett Jr.

Almost anyone with fond memories of their days as a student at Hinds Community College has a favorite “Hinds story.” Matt Woods is no exception. 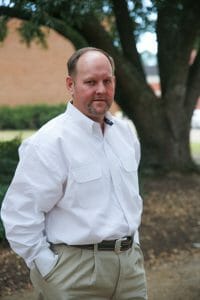 His favorite story involves an apple and what he carried on as a family tradition in English instructor Jenny Muse’s class. It started with his father, Alvin Woods, who walked into Muse’s class “brushing an apple on his shirt, plopped it on her desk and winked at her.”

Matt Woods remembered the story when he started at Hinds the week after he graduated from high school.

“A group of us from south Jackson rode together here for the first day of class. I told the others I’d be a little late, but I’d be there in just a second,” he recalled.

Muse “called roll and got to ‘Matt Woods,’ then said ‘I guess he’s not going to be with us today.’ I opened the door and walked through everybody up to her desk and said, ‘Ms. Muse, I apologize for my tardiness’ while I shined an apple on my shirt. I plopped it on her desk and winked at her.

Once he got inside the classroom, Woods found success and honed skills learned being around his father’s feed mill. He was a member of the Agriculture Club and the livestock judging team. He credits a handful of people who Woods said were “more than just instructors” to him, including Billie Banes, Drs. Thad Owens, Bill Dixon and Roger Jones. Jones has worked at Hinds since 1970 and still chairs the college’s Agriculture Department. The tutelage helped Woods earn his bachelor’s degree from Mississippi State University, in Agriculture Education.

“They prepared us for college life and the real world,” he said. “And they did it with a caring, yet firm hand.”

Jones remembers seeing signs of success early in Woods’ days as a student.

“Matt was a very conscientious and hardworking student that was always very mature for his age,” Jones said. “I have seen him use skills he had in student organizations at Hinds, along with the knowledge he gained as a student here and at Mississippi State University to become very successful. I am proud of the man he has become.”

Woods worked at his father’s feed mill briefly after college, then returned to Hinds in 1995 to earn an Emergency Medical Technology certificate to bolster his stock as a volunteer firefighter in Learned. In 1998, he took up a job offer from Jackson-based Cal-Maine Foods – the nation’s largest producer and marketer of shell eggs – after mulling becoming a teacher himself. He worked in the central purchasing area for 17 years before becoming chief of the company’s feed mill in 2015.

“The most rewarding part of my job is to look at the eggs we produce and to know those birds were fed through feed mills I’m responsible for,” he said. “It’s also very challenging because we want to be the most wholesome, safest food source there is.”

He has also been a hand-up to some of the best students who’ve graduated from the Agriculture Department in recent years. That includes Christopher McCloud, who manages the company’s feed mill in Watts, Okla., and Austin Van Etten, an assistant manager in Hammond, La. “The students who come through the department here have the skills and knowledge to either step straight into the workforce and be a productive employee, or go on to a university and pursue a bachelor’s degree,” he said.

His Hinds experience has continued beyond his days as a student. As a member of the advisory council for the Agriculture Department, he helped develop the curriculum for the Animal Science Technology, Poultry Option class introduced in 2015.

“If Hinds Community College went further than two years, I’d probably be working on my tenth doctorate degree right now,” he said. “I would never have left. Nothing compared to my time here. It made for an easy transition from being a high school kid to being a college student.”