Drew Ferguson likes what he sees of it so far at Hinds.
By: Danny Barrett Jr.

College is an awakening on many levels for students fresh out of high school, and Drew Ferguson likes what he sees of it so far at Hinds. 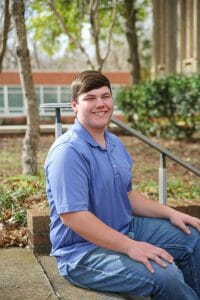 “It’s nice to know the teachers, who know you by name,” said Ferguson, of Raymond, who goes by Jack. “It’s small classes and it’s a comfortable atmosphere. And I’ve really branched out and met new people, which has been eye-opening and fun.”

Ferguson comes from a Hinds family, as his brother, Alec, graduated in 2017 and his grandfather, Robert Ferguson, attended Hinds when the college still included a high school curriculum. Later, the elder Ferguson was a state legislator and member of the Hinds Community College Foundation Board. His grandmother, Martha, met Robert at Hinds and was a member of the Hi-Steppers precision dance team. Both were instructors at Hinds for a time – in the case of his grandfather, it was Business Law, in which Jack is now enrolled.

“Knowing that my grandparents both walked these halls, taught and came to school here, it’s a good feeling to know I’m on the right track,” Jack said.

Attending college on multiple scholarships allows Jack to juggle work and school with much less stress.

“It makes me feel better to not have to ask my parents for money to attend school,” he said. “I work during the evenings, so any books I need to pay for, I can pay for it out of my pocket. And I live just five to 10 minutes away. It’s not too stressful, so I can manage work and school. The comfort level here is great.”

He’s already coming to appreciate the persistence of his instructors as he makes his way through school.

“They always send reminders and make sure to tell you things in class, send emails and messages outside of class. It’s extremely helpful. I don’t have much time for procrastination,” he said.

His goals once he completes his education would take advantage of what he likes to do and, ideally, keep him in Mississippi.

“I’ve always been interested in running my own business someday,” he said. “My brother and I have talked about doing a gunsmith and sporting goods store. He would do the labor part and I’d manage the finances.”