The J. Louis Stokes Student Center, a 21,066-square-foot facility, will be open to students, staff and the public. It houses computer labs, Student Services offices, the campus bookstore and dining areas. 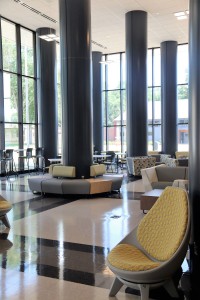 The newly remodeled Student Union on the Utica Campus of HCC. This lounge area has room for 100 students to gather and socialize between classes.

Renovations on the building began October 2013 with the first of three phases, which concluded this summer. The $5 million project was funded by the Title III, Part B Strengthening HBCUs funding formula.

“The third phase was the addition,” said project architect Bill Campbell. “We gutted the entire first floor and put on additions to three sides of it to increase student dining, to create a student lounge space and create an enlarged kitchen and dining area.”

The student center on the Utica Campus was dedicated on March 19, 1998, to J. Louis Stokes, the sixth and final president of Utica Junior College. Stokes held the position during the college’s merger with the Hinds Junior College District in 1982. From 1987-1993, he was vice president for Continuing Education and Community Services. From 1993 until his retirement in 1997, he served as executive assistant to the president for special projects.