The Residence Hall Association at Hinds Community College’s Raymond Campus will host a series of Take Back the Night™ activities throughout April, culminating in a campus walk on April 30.…
By: Cathy Hayden 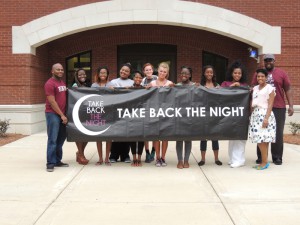 The Residence Hall Association at Hinds Community College’s Raymond Campus will host a series of Take Back the Night™ activities throughout April, culminating in a campus walk on April 30. The goal is to boost awareness of sexual assault.

“Sexual assault is a big thing that could happen on any college campus. We need to make people aware,” said Allison Thurman, a nursing student and director of external communications for the Raymond Campus Residence Hall Association. “Younger girls who just get to college, they may think, ‘Oh, this is normal. What this guy is trying to do, this is normal.’ They may not realize it’s sexual assault, and you don’t have to take this. We’re trying to bring awareness to them and to let them know how to protect themselves and let people break the silence.”

Beginning at 7 p.m. on April 30, the Raymond Campus walk will encircle the residence halls and will feature chants and signs promoting awareness of sexual assault, ending in the Courtyard in the center of campus. The walk will include students, faculty and staff, as well as members of the community. It will conclude with a Point of Light ceremony and a guest speaker.

“Creating awareness allows victims to know they are not alone and may receive support from the Hinds campus community. This also allows our campus community to feel safe knowing the College supports them,” said Alonzo Bouldin, resident hall director who is organizing the project.

Other events leading up to Take Back the Night include:

•           Dinner and a show in the Raymond Campus cafeteria on April 13 and 14, co-sponsored with the Counseling Center

Take Back The Night® is an international Foundation that serves to create safe communities and respectful relationships through awareness events and initiatives. We seek to end sexual assault, domestic violence, dating violence, sexual abuse and all other forms of sexual violence.

“We would love to see students, faculty and staff as well as community members participate in the walk. A larger number of participants allow us to make a stronger stance against sexual misconduct,’’ Bouldin said.

In January 2014, The White House reported that one-in-five women are sexually assaulted in college. In response, President Obama created the White House Task Force to protect students from sexual assault in an effort to develop and coordinate federal response to campus rape and sexual assault.

According to the Bureau of Justice Statistics, 78 percent of sexual violence involved an offender who was a family member, intimate partner, friend or acquaintance. Additionally, the percentage of sexual assault victimizations reported to the police has declined in recent years and the most common reason for victims not reporting was fear of reprisal.

For more information about this event or to participate, please contact The Housing and Resident Life Office at .601.857.3222 or email Alonzo Bouldin at Alonzo.BouldinJr@hindscc.edu