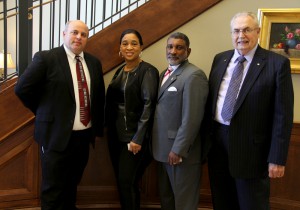 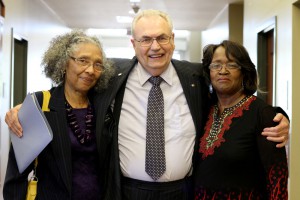 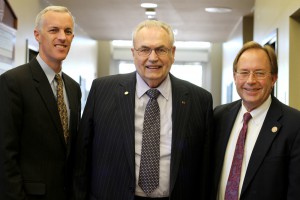 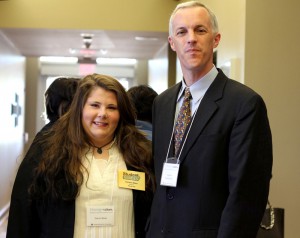 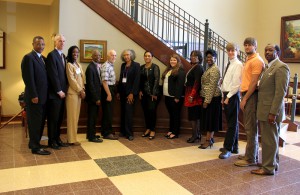 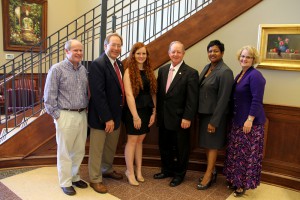 Jeff Hughes of Richland, left, math and Student VOICES instructor; Rep. John Moore of Brandon; Hinds student Regan Clark of Brandon, who graduated from high school through the Hinds Gateway to College program; Rep. Tom Weathersby of Florence, Sherry Franklin, dean of students on the Rankin Campus and Valerie Barton, director of the Rankin Career Center who was formerly director of the Gateway to College program 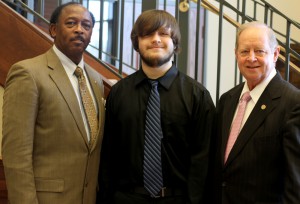 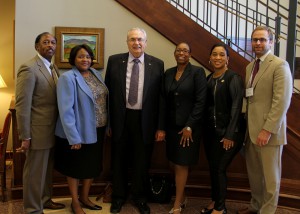 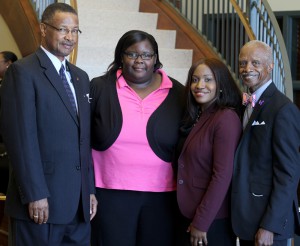 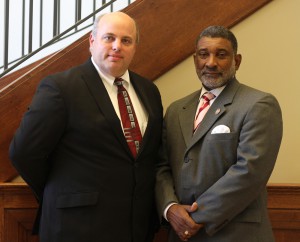 Hinds Community College hosted the annual fall legislative luncheon on Oct. 16, giving local lawmakers a chance to talk to students and employees and hear about the priorities of the 15 community colleges in Mississippi.

The colleges are asking for a $79 million state funding increase for FY 2016, half the amount it would take to get to mid-level funding mandated by the Legislature in 2007.

“The major thing we’ve been talking about for a number of years is our no. 1 priority, mid-level funding,” said Hinds President Dr. Clyde Muse. “Hopefully, now with the money situation looking better than it has in a number of years, we can make some progress toward achieving that goal.”

The colleges are also asking the Legislature to provide $9 million to fund dropout recovery, which includes job training and basic employability skills as a part of the Adult Education program, as well as $77 million for capital improvements, including $50 million for educational technology.

Hinds students who met with legislators included Student VOICES, a statewide organization designed to empower community college students to become civically engaged at the local, state, national and global levels. One of their missions is to support mid-level funding, which is a per-student funding level for community colleges midway between funding for K-12 and regional public universities students.

Among the Hinds students who spoke was Russell Girault of Crystal Springs, who started in developmental classes for underprepared students and is now an Honors student majoring in computer science.

“Today, through much struggle and perseverance, I am in the more advanced courses such as Calculus II, computer programming, physics with calculus,” he said. “I had to start literally at the bottom and fight tooth and nail up the ladder for my education. Without those remedial courses I would not be standing here now able to speak of my successes, but rather I would be outside waiting on the concrete truck to deliver. Likewise, because of the various grants I have been able to receive along with the lower costs of attending a community college, I have been able to pay my tuition.”

Regan Clark of Brandon graduated from Brandon High School through the Gateway to College program at Hinds’ Rankin Campus that allows students to earn a high school diploma and 36 college credit at the same time.

She was on the verge of dropping out after having a baby, but said “Gateway to College gave me the opportunity to stay in school and provide a life for not only me, but my son too.”

Now enrolled as a college student on the Rankin Campus, she plans to major in civil engineering.

Adrienne Banks of Jackson lost her job and enrolled at Jackson Campus-Academic/Technical Center. The Single Stop program, which helps students connect with outside resources to meet transportation, housing and other needs, worked with Banks to make sure she had the support services to go to school.

“I needed help with finding affordable housing, transportation, jobs, health insurance, and later with my SNAP case. Now I don’t have to worry about how I am going to get to school, how I could afford hospital visits and how or what I am going to eat any day,” said Banks, an early childhood education major. “It was unimaginable for someone to care so much for me. Single Stop has been a huge blessing.”