The Mississippi Committee for Employer Support of the Guard and Reserve (ESGR), a Department of Defense (DoD) office, awarded Hinds Community College President Dr. Clyde Muse with a Seven…
By: Cathy Hayden 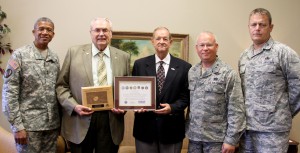 “The Seven Seals Award is the only Employer Support of the Guard and Reserve award that bridges both the employer and ESGR volunteer recognition awards program,” said Jack Wallace, ESGR MS state chair. “It was created by ESGR to publicly recognize individuals who provide significant achievement, initiative or support that promotes and supports the ESGR mission.”

Muse was nominated by Colonel Jonathan T. Wall, a member of the 172d Airlift Wing.  The award was given Oct. 9 for his support during the 172d Wingman training events for the past two years.

“We couldn’t do in the National Guard and all of our reserve components what we do to protect in this nation if it weren’t for good employers who understand that we have a mission to do and we have a job to do,” said Major General Augustus L. Collins, Adjutant General of Mississippi.

Collins, a graduate of Northeast Community College, said it was a particular pleasure to see the award presented to a community college president. “It does my heart good to see someone from that system being recognized for their service and their support to our military operations,” he said.

“I’ve seen what it can do for men and women,” he said. “I’m always happy to help in any way that I can with our service men and women because I have a strong feeling, and I am a patriotic person.”

Also on hand for the presentation was Maj. Gen. William C. Crisler Jr., assistant adjutant general for the Air National Guard. Crisler said the Guard has used meeting space at the Clyde Muse Center on the Rankin Campus in Pearl. “I want to thank you personally for supporting the wing,” he said. “That facility is absolutely perfect. Our partnership with you has just been outstanding.”

Colonel Harold Mashburn, who played football for Hinds in the late 1970s, also presented Muse with a plaque. “This is just a token of our appreciation for everything that you’ve done for us,” said Mashburn, 172d Airlift Wing Mission Support Group commander.

ESGR, a DoD office, seeks to foster a culture in which all employers support and value the employment and military service of members of the National Guard and Reserve in the United States. ESGR facilitates and promotes a cooperative culture of employer support for National Guard and Reserve service by developing and advocating mutually beneficial initiatives, recognizing outstanding employer support, increasing awareness of applicable laws and policies, resolving potential conflicts between employers and their service members, and acting as the employers’ principal advocate within DoD.

Paramount to ESGR’s mission is encouraging employment of Guardsmen and Reservists who bring integrity, global perspective and proven leadership to the civilian workforce.